Sale on canvas prints! Use code ABCXYZ at checkout for a special discount!

I am phasing out this store. To see my newest images, current print products and new lower pricing please visit https://www.curious3d.com

How I Create These Images 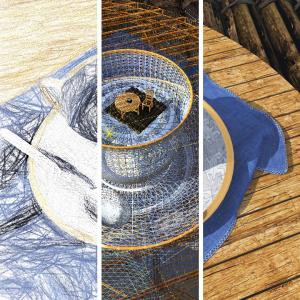 The images in my gallery are 3D renderings. They are 2-dimensional still images that have been rendered from 3-dimensional digital environments that I created using 3D modeling and rendering software and other software packages. Before your eyes glaze over, I promise not to explain this in an overly technical way. Well, I promise to try.


One thing you should know is that these images are not created from photographs. Although I sometimes use images for inspiration, textures, or references, the works here are original works that I've created using the techniques I'll describe on this page. None of the places in my artwork are real, although some may have been inspired by real places. The worlds in my gallery exist only in my imagination, and hopefully now, in yours as well.


To clarify, there are many different workflows for any process. This is how I approach making my images with my toolset.


The process of creating 3D renderings incorporates various traditional artistic techniques, but relies on pixels instead of paint, the computer mouse or a digitizing tablet instead of a brush, and digital geometry instead of clay. Almost everyone has seen 3D renderings these days; whether it's an architectural walkthrough on television or a modern animated movie. The technology is used in product design and production, advertising, medical visualization, and dozens of other industries.


Basically, it's a lot like using the computer to create a diorama, except instead of putting it in a shoebox like you did in school, you build the pieces and assemble the scene in the computer. It all starts just like any other work of art does. With an idea, and a plan. Or something like a plan. In my case, I start with a sketch, where I rough out the composition and get a general idea of the color palette and major parts of the image. Once that's reasonably in place, I get started on modeling.


3d modeling is how each object in an image is created. The process involves using computer programs (3DS Max, for example) that allow the artist to create digital wireframe objects. The wireframes are created with points or curves, defined by math and visible on the computer screen in a simulated 3-dimensional space. Models can be made in different ways, by starting with a basic polygonal shape and modifying it, (like sculpting with clay) or by creating outlines and then volumizing and detailing the object (like creating a form for papier mache).


The wireframe objects include everything and anything you see when you look at my images—clouds, flowers, mountains, trees, people, animals—everything begins with a digital wireframe. I either create, purchase, or re-use items that I've already made as my first step in making an image. In the sample image at the right, I had to make a teacup, a spoon, a table, a napkin, a raft... all the things that make up the content of the scene.


Once completed, the wireframe objects are then wrapped or filled with color and texture created specifically for that object. The software allows the artist to specify exactly how and where the texture material is applied to each object in a scene. As part of the material, simulated or physical texture—called bump maps or displacement maps—can be added to lend further realism to an object. Bump maps take what would ordinarily be a completely flat surface and either change the physical geometry of the item, or simulate that change, to give a surface detail features like cracks, or grit, or lumps. General surface properties can be definied and modified, making the material shiny, reflective, illuminated, or translucent, for example. Materials can be made from scratch in a paint program or can be modified from photographs, or they can be built using mathematical functions from within the software. Material selection is the most critical part of any of my images. A relatively simple model can be made into something extraordinary by correctly creating and applying the right material.


Compositing is easy to explain. It's where I take all the objects I've created and put them into their final places in the simulated 3D environment to make up the scene. It's like putting the furniture and accessories into the dollhouse. At this point, I make many adjustments to positioning, I add or remove lights as necessary to properly illuminate the scene, I set the camera angle and any atmospheric effects, and I make what seems to be millions of tiny adjustments until everything is the way I want it. Once I'm finished, the scene itself is complete. The environment exists in imaginary computer space. All that's left to do is make a picture out of it.


Rendering is the only part where the computer does the work without human intervention. The computer takes all the information the artist has carefully loaded into the scene, and calculates what each surface looks like based on the shape, materials, and lighting that was set up in previous steps. It's essentially taking a photograph of the finished environment, but instead of using light to expose chemicals on film, the computer calculates the visible details of the scene (a process called ray tracing) and turns that information into a 2-dimensional image.


Depending on how complex the scene is, this can be a very time consuming step. I am lucky enough to have multiple computers devoted to rendering, which makes relatively quick work of the job. Back in 1998 when I first started doing this, there were many times I just had to let my computer render for a couple days in order to get a high enough resolution image.


Lots of 3d modeling and rendering is done for functional purposes, or for purposes like animation where there are millions of still images. In such cases, editing the finished images by hand individually is both time consuming and unnecessary. But for my purposes, for creating the image that I have envisioned throughout this whole process, I always go in and work on the final renderings to bring them to where I want them to be. With a digitizing tablet and using both software filters and hand work, I go over each image, giving it a painterly effect that softens the crispness of 3d rendering. I also add and refine details, adjust color and contrast levels, and occasionally crop the image to optimize composition. For my final result, I like a certain organic, hand done quality when you look closely at the work. The last thing I add is my signature.